So everybody can calm down now, K? 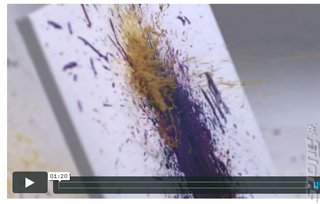 Disclaimer - Some people will find the video at the foot of this story disconcerting, unpleasant even life-shatteringly vile. If you don't like the idea of paint, bottoms, painted and painting bottoms, fat hairy men or the Zune, then don't click through.

Okay, so this is sort of related to gaming as Microsoft's Zune does suck cash from the Xbox 360 and other areas in the Entertainment and Devices Division. But mostly it's about busting myths.

The myth being slung around the Internet is the somehow the following advert is for Zune and was produced with the consent of Microsoft. It wasn't. It was produced by some people called Sibling Rivalry. They are, "a directing duo specializing in internet video content...

Here's what they say about the 'Ad': "DISCLAIMER: Microsoft had NO part in making this film. We made this with no money and for fun, so enjoy!"

Wonder what Microsoft will make of that? The ad features a man apparently shooting paint from his... well... see for yourself if you are sick enough and you have your parents' permission in triplicate.

You have been warned

Jun|'14
E3 Live: Microsoft's Xbox Event
May|'14
Microsoft Not Selling Xbox Division
May|'14
Kinect-Free Xbox One Selling Well
May|'14
The Xbox One Designer and Building In Kinect