?Why so Snarky, Sparky?? 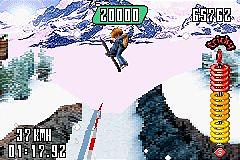 All Images (16) »
One of our favourite games from the past year or so is coming to one of our favourite consoles in November. SSX Tricky has rocked the PS2, and more recently, the GameCube and Microsoft Xbox, in a genuinely amusing and absorbing over-the-top snowboarding racer/stunt show-off style. And come November, you?ll be able to leave the house with it.

SSX Tricky, in its bigger brother console guise, takes itself a little less seriously than the likes of ESPN Winter X Games Snowboarding and Amped: Freestyle Snowboarding, and is a much better game for it. If you want to try the outrageous tricks that you can never pull off in so-called simulations, SSX Tricky is the game to play. Judging by the first screens made available, the Game Boy Advance incarnation is going to prove as much fun as its predecessors.